A Guide to Classic Six Apartments in NYC 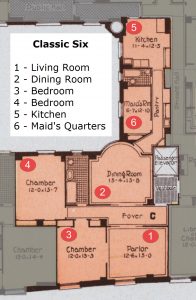 Finding a three-bedroom house in downtown New York City is nearly impossible since apartments and condos rule the real estate market. So the next best choice is a three-bedroom apartment smack dab in the city’s heart. One such option that is pretty popular is the prewar-style classic six apartments. If you’re interested in learning more about buying a classic six apartment in NYC, this is the perfect place to start. This guide teaches you everything you need about the classic six flats in NYC. We will include what they are, why people want them, the pros and cons, and if you should consider buying one. We will go over where to find classic six for sale in NYC.

A classic six in NYC is located in a prewar building and features large rooms, high ceilings, and wood floors. Specifically, you can commonly find these homes on the Upper East Side and Upper West Side of Manhattan. So let’s dive right in. Here is everything you need to know about classic six apartments in NYC.

What is a Classic Six Apartment?

As the name so eloquently implies, you can probably guess how many rooms a classic six apartment has and why it’s named that way. A classic six consists of six rooms. But it’s not just six random rooms. It will always include the following:

A maid’s room is typically a smaller bedroom located off the kitchen and usually has its bathroom (full or half). A classic six can also have any number of bathrooms. But it’s commonly one-and-a-half or two bathrooms in addition to the one connected to the maid’s room. A classic six apartment is a three-bedroom, two-bathroom unit with a separate, formal dining room.

As you can imagine, they’re pretty sizable and, therefore, also expensive, especially in NYC. With how big and costly they are in NYC (more on that later), why are classic six apartments desirable?

Why Are Classic Sixes Desirable?

Nowadays, most people aren’t housing maids or servants in their 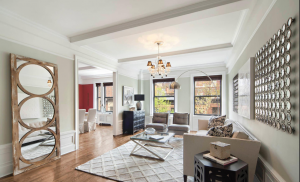 apartments. But that doesn’t mean they aren’t still a desirable place to live. You can find Classic 6 apartments in Co-op buildings built between the 1920s and the 1940s.

Those are primarily on Manhattan’s Upper West Side’s Upper East Side.

Additionally, there are some Classic 6 apartments in certain parts of Brooklyn. There are examples in Crown Heights, Park Slope, Brooklyn Heights, and Prospect Heights. They have become so popular that developers incorporate classic six apartments into their projects for new constructions.

Let’s take a look at a few of the main reasons that classic six apartments are still desirable to this day.

1. Higher ceilings than most places.

Square footage isn’t the only meaningful measure of space, especially where it comes at a premium like NYC.

2. Prewar nuances such as moldings and oak floors.

Many people are attracted to the classic six because of its high ceiling and other aesthetics.

3. Plenty of space to raise a family.

With three bedrooms (albeit the maid’s room is a bit small), a classic six apartment is plenty big enough to raise a family. They are as spacious as many two- or three-bedroom houses, but you can find these in the heart of NYC, unlike big homes!

4. Maid’s room can serve as a great office space.

Although they are great options for raising a family, a classic six apartment can also be ideal for roommates since the living spaces have good separation. The bedrooms are separated.

There are multiple bathrooms, and the separate maid’s room has its bathroom. Perfect for three roommates to have a bit of privacy.

Are There Any Downsides to a Classic Six in NYC?

Although some advantages to buying a classic six make them a desirable property choice in NYC, they have a few disadvantages. Here are a few 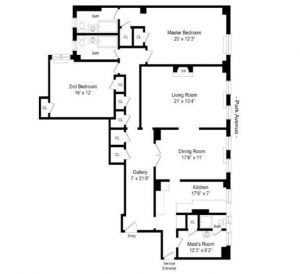 of the downsides to purchasing a classic six apartment:

The kitchen is separate from the dining room, which is separated from the living room. A classic six is severely lacking in the age of open floor plans. Classic six apartments are probably not for families or individuals who prefer more flexible layouts. Additionally, the maid’s room is often tiny and unusable for most families.

Should You Buy a Classic Six Apartment?

But they have a few drawbacks. Strictly financially speaking, a classic six is not a cheap apartment to buy in NYC. That said, the city is constantly growing, and property values are steadily increasing. So, purchasing a classic six apartment now might end up representing a solid investment for the long term.

So start looking into classic six for sale in NYC!