Home Foundations in New York: A Look at the Different Types

Buying a home in New York is inherently a stressful situation. Therefore, add in the potential for significant issues, like existing foundation damage or problems. Consequently, you may be more nervous than excited to move into your new home. As a result, foundation problems can be very costly. So identifying them before you move in can provide you with peace of mind and save thousands of dollars after closing. We will discuss home foundation repair for every home foundation type and highlight slab foundations. Below, we’ll discuss the different types of foundations. How to identify problems for each style. And how to resolve them. We’ll also offer average prices for foundation repair in New York to help you decide if buying a home with existing damage is worth it.

Before we dive into how to spot foundation issues, it’s helpful to know the different types of foundations you’ll find in New York, as foundation styles vary throughout the state.

A slab foundation consists of a large concrete slab that acts as a barrier between the ground and the flooring above.

So the slab is poured directly onto the ground after soil compaction and preparations. Also, slabs don’t allow for any under-home space, so the lowest area in your home — the first floor — will be entirely above-ground.

Pier and beam foundations aren’t widespread in New York but appear in some areas. These consist of concrete piers set deep into the ground on top of which beams sit and support the floor joists above.

Like a pier and beam foundation, a crawlspace foundation allows for a three to four-foot area beneath the home. Crawlspaces have a stem wall, usually made of poured concrete or concrete blocks, enclosing the under-home area.

Crawlspaces allow for storage and easy access to utilities, commonly run underground in New York, especially in upstate areas where the frost line is quite profound.

Basement foundations include a full basement, typically a seven or eight-foot area below-ground. Basements are finished or unfinished, providing storage and easy access to utilities or additional living space below the first floor.

Basements typically use a slab as the floor and poured concrete or concrete blocks as walls enclosing the space.

2) Common Foundation Issues in NY and How to Spot Them

Unfortunately, foundation damage is prevalent in New York, and many issues cost thousands of dollars to repair. Understanding how to 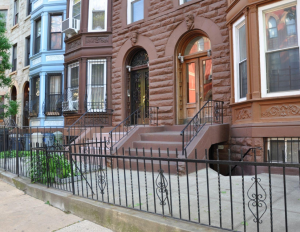 identify problems and the costs associated with fixing them is crucial, especially when purchasing a home.

Below are the most common foundation problems in New York, identifying them, and the average costs to repair them.

Foundation cracks are the most common type of foundation damage in New York. Gaps appear in nearly all foundations, but the severity varies significantly from style to type.

Thin vertical cracks on your foundation walls or spreading out over the surface of your slab are typically from the normal settling of the concrete. These usually don’t suggest structural damage, and they often don’t require any repair. To keep water out, many homeowners choose to seal them — for an average of around $300 per crack.

Horizontal cracks on crawlspace or basement walls are much more severe issues. They develop from hydrostatic pressure when the clay-rich soil in New York gets saturated and expands. Horizontal cracks indicate structural damage, usually costing between $3,000 and $10,000 to repair.

Many crawlspace and basement walls in New York are made of concrete blocks, and cracks can form in stair-step patterns along the contours of the blocks. These cracks develop from differential settling, a process by which a portion of your foundation loses support underneath and sinks further into the ground than the rest of your home. This is common in New York because of the highly expansive clay soil and above-average rainfall.

Stair-step cracks usually require underpinning to restore stabilization, which can total anywhere from $5,000 to $20,000.

=> How to Identify Foundation Cracks

Foundation cracks are generally easy to identify in crawlspaces and basements, and you can complete a quick, visible inspection to check for them. Cracks on slabs are more challenging, but you can often see the results of cracking on the visible strip of concrete outside.

Many homes built slab-on-grade in New York have plumbing lines running through the concrete slab, especially in areas closer to Manhattan where development was rapid, and measures were taken to keep costs down.

The pipes beneath your slab can crack in response to soil expansion. And contraction or burst if they become too cold in the New York winter temperatures.

=> How to Identify Under-Slab Leaks

These leaks are usually very challenging to spot as a buyer. You can look for soggy portions on the lawn, low water pressure throughout the home, or signs of foundation instability. This includes cracks in the sheetrock, doors, and windows that get stuck and sloping flooring.

Lastly, foundation leaks are common in basements and crawlspaces because of the absorbent soil and above-average rainfall in New York. Water can wick through pores or cracks in the concrete and settle in the under-home area or evaporate into the air.

In most cases, a basement waterproofing system — totaling between $2,000 and $10,000 in New York — is the best option to correct leaks.

=> How to Identify Foundation Leaks

To find leaks most easily, head into the crawlspace or basement. Keep an eye out for humid air, musty smells, visible water, and water stains on the concrete. Look at signs of pest infestation and visible mold growth.

Unfortunately, foundation damage is somewhat familiar in New York because of the expansive soil and climate in the area. Foundation repair can be as affordable as $300 or as costly as $20,000. Understanding the most common foundation issues and how to spot them should